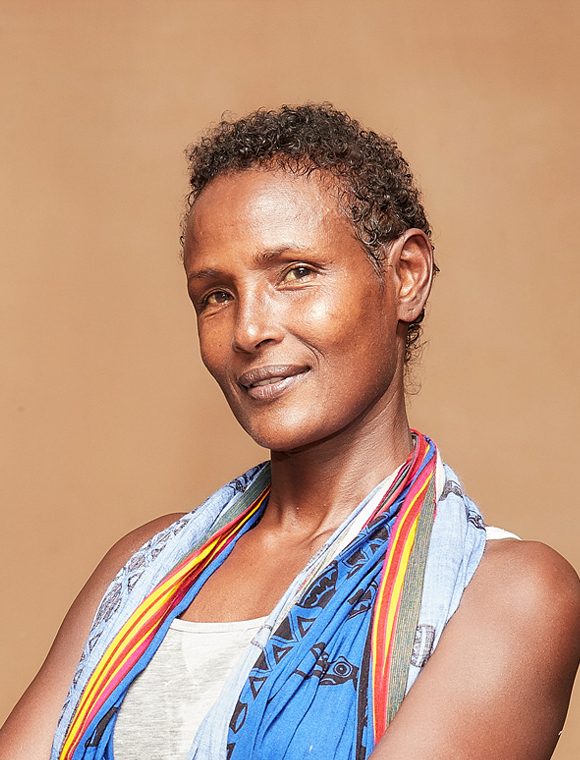 Waris Dirie is a pioneering human rights activist who fought for the eradication of female genital mutilation (FGM).

She was the first person to publicize to the world the violence of FGM. By raising the issue of FGM as an international human rights agenda, she contributed greatly to passing a resolution to ban its practice. 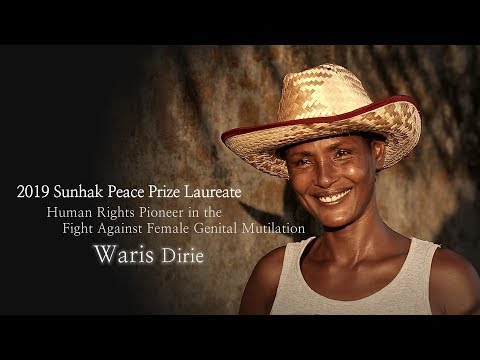 Waris Dirie is a human rights activist who fought for the eradication of FGM. As the first person to draw the world’s attention to the violence of FGM, which causes extreme pain and can also lead to death, she raised it as a human rights issue and has been leading the anti-FGM campaign to eradicate the cruel practice. Through her efforts, people around the world have started to view FGM as a violent crime. The campaign saved millions of girls who would have been at risk of the violent practice.

Born into a goat-herding nomad family in Somalia, she underwent female circumcision at the age of 5. In 1997, when her fashion career as a world-class supermodel was at its peak, she revealed her experience with FGM on behalf of hundreds of millions of African women who had gone through similar procedures. This brave start led her to become a human rights activist to end the violent practice that is being carried out in Africa. She was appointed as the first Special Ambassador of the United Nations for the Elimination of Female Genital Mutilation in 1997, and has been investing tireless efforts into anti-FGM campaign.

As a result of her efforts, 15 African Union member countries ratified the Maputo Protocol, in which Article 5 lists FGM as a harmful practice that must be ended. In 2012, the United Nations General Assembly unanimously passed a resolution banning the practice and set a goal to eliminate FGM by 2030. This milestone became a turning point that saved the lives of millions of girls who were potentially at risk of the violent practice.

Female genital mutilation, or female circumcision, is carried out as a ritual in some parts of Africa and others. During the process, the external female genitalia are cut or removed, and the operated area is sewn together leaving a tiny hole. Although this ritual has been practiced for over 3,000 years, it does not have any medical benefits. This cruel practice, which is a crime in many countries, is inhumane and often causes infertility, problems with urination, high blood loss, infections and in some cases even death.

According to the World Health Organization (WHO), over 200 million girls and women have been affected by FGM, which is prevalent in more than 30 countries, including parts of Africa and the Middle East. About 3.5 million girls and women annually and about 9,800 girls and women’s lives daily are threatened by the brutal practice. Recently, due to increases immigration, FGM is also being carried out in countries in Europe, North America and Asia.

In 2002, Waris Dirie established the Desert Flower Foundation, named after the English translation of her first name, to actively promote the eradication of FGM around the world. Her first book, Desert Flower, published in 1997, contains her life story including her experience with FGM. It has been translated into many languages and has sold over 13 million copies around the world. A major featured film based on her book was released in 2009 under the same title, Desert Flower. It has been shown in 40 [이1] countries around the world further raising the awareness around FGM and changing people’s perspective around FGM. The film has also been shown by international NGOs including UNHCR and UNICEF.

Al Jazeera, the largest broadcasting company in the Arab world, invited Waris Dirie to be interviewed on journalist Riz Khan’s program—the first TV program in the Arab world to touch on the issue of FGM. In the interview, Dirie discussed the dangers of FGM and asked everyone to help eradicate the practice. The interview was viewed by 200 million people and created the opening for FGM to be discussed publicly as a human rights issue in the Arab world. Waris Dirie states, “Communities need to be educated in the fact that FGM is not prescribed by any religion and it is not part of a culture.” There was a time when her bold statements and actions led to her receiving threats. However, she has continued to lead the campaign to eradicate FGM even at the risk of her life.

Because of her achievements, she received the Oscar Romero Award presented by the Catholic Men’s Movement in 2007, and the Legion of Honor award from the French government.

Healing the Souls and Bodies of FGM Victims through Reconstructive Surgery

Waris Dirie is also leading efforts to provide reconstructive surgery and comprehensive care for victims of FGM, who are physically and psychologically affected by the brutal practice. In 2013, the Desert Flower Foundation partnered with the Waldfriede Hospital in Berlin to open the first Desert Flower Center, which provides comprehensive treatments for victims of FGM. Currently, these centers operate in Paris, Berlin, Stockholm and Amsterdam with a medical team of 120 doctors, nurses and staff. The centers provide physiological support, reconstructive surgeries, vocational training, and educational programs.

FGM usually is done at home without any medical device. When a girl or a woman goes through the procedure, there is a high chance of developing obstetric fistula, an abnormal opening between the genital and urinary tracts. Girls and women who are affected by obstetric fistula can suffer from incontinence of urine or feces, causing various infections, extreme menstrual cramps, obstructed labor, and also infertility.

When Waris Dirie first opened the Desert Flower Reconstructive Centers, her goal was to provide educational materials for civil society groups and academic institutions to prepare as many doctors as possible to perform reconstructive surgery. The centers have provided education on FGM reconstructive surgery to doctors and obstetricians. So far, medical teams from France, Austria, Belgium, Brazil, Egypt, Ethiopia, Germany, Italy, Morocco, Sierra Leone and the United Kingdom have participated in the education and have performed the reconstructive surgery on FGM victims in their own countries.

Although many countries have enacted laws to ban FGM after the United Nations General Assembly unanimously passed a resolution banning the practice, FGM is still being done around the world. Waris Dirie recognized that the practice is still being carried out for financial benefit of the families from selling their daughters for a high bride price and not because of tradition or culture. Therefore, as a fundamental solution to the issue, Dirie devoted her efforts to helping victims to stand independently by providing basic literacy education and vocational education.

The Desert Flower Foundation runs a sponsorship program called Save a Little Desert Flower, which protects girls in Sierra Leone and Djibouti from FGM and provides financial sponsorship for the girls to attend school. Also, Waris Dirie started a program called Education Initiative to lower the child illiteracy rate. In 2018, she started building an elementary school in Sierra Leone to raise children’s basic literacy. In addition, she started a pilot project in many parts of Africa called Together for African Women to provide women’s education, vocational training and guaranteed income. She is also working on a project with fair-trade companies in Ethiopia and Kenya that produce scarves and other fair-trade products providing employment to thousands.

Waris Dirie states, “My goal is to help the women of Africa. I want to see them get stronger, not weaker, and the practice of FGM simply weakens them physically and emotionally. Since women are the backbone of Africa, and they do most of the work, I like to imagine how much they could accomplish if they weren’t butchered as children and left to function maimed for the rest of their lives.” Waris Dirie is calling out passionately that eradicating FGM can empower and expand the rights of women and transform Africa. 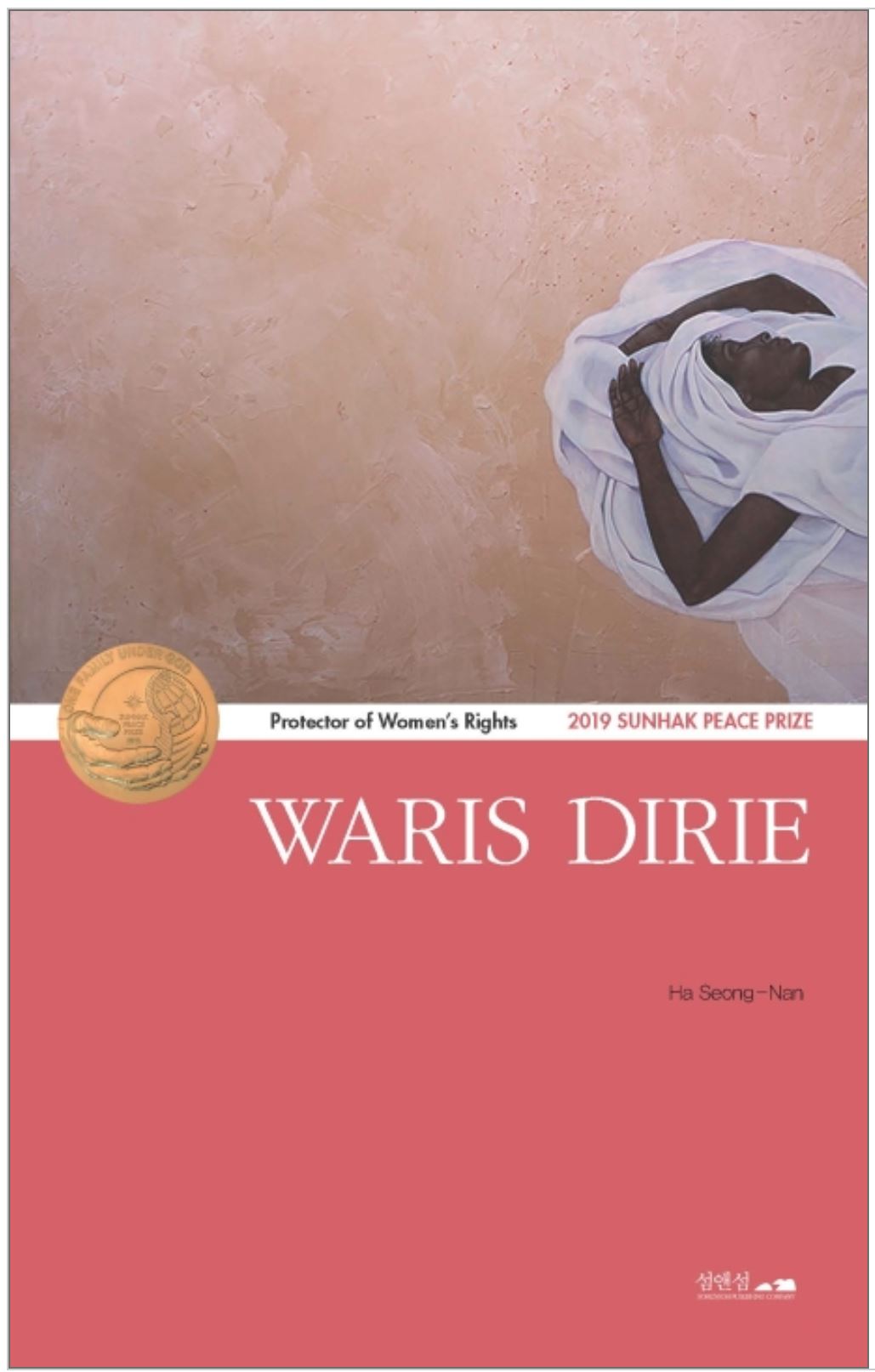