A row of stretchers lined the front of the crammed street outside of Kabul’s Emergency hospital on Thursday night, as panicked faces waited and wailed in the immediate aftermath of the coordinated suicide attacks that ripped through the already on-edge Afghanistan capital.

The majority of patients were rushed to the starkly red-and-white facility, formally known as the Surgical Center for War Victims and operated solely by the Italian non-governmental organization (NGO) Emergency, which is considered the most critical in Kabul. 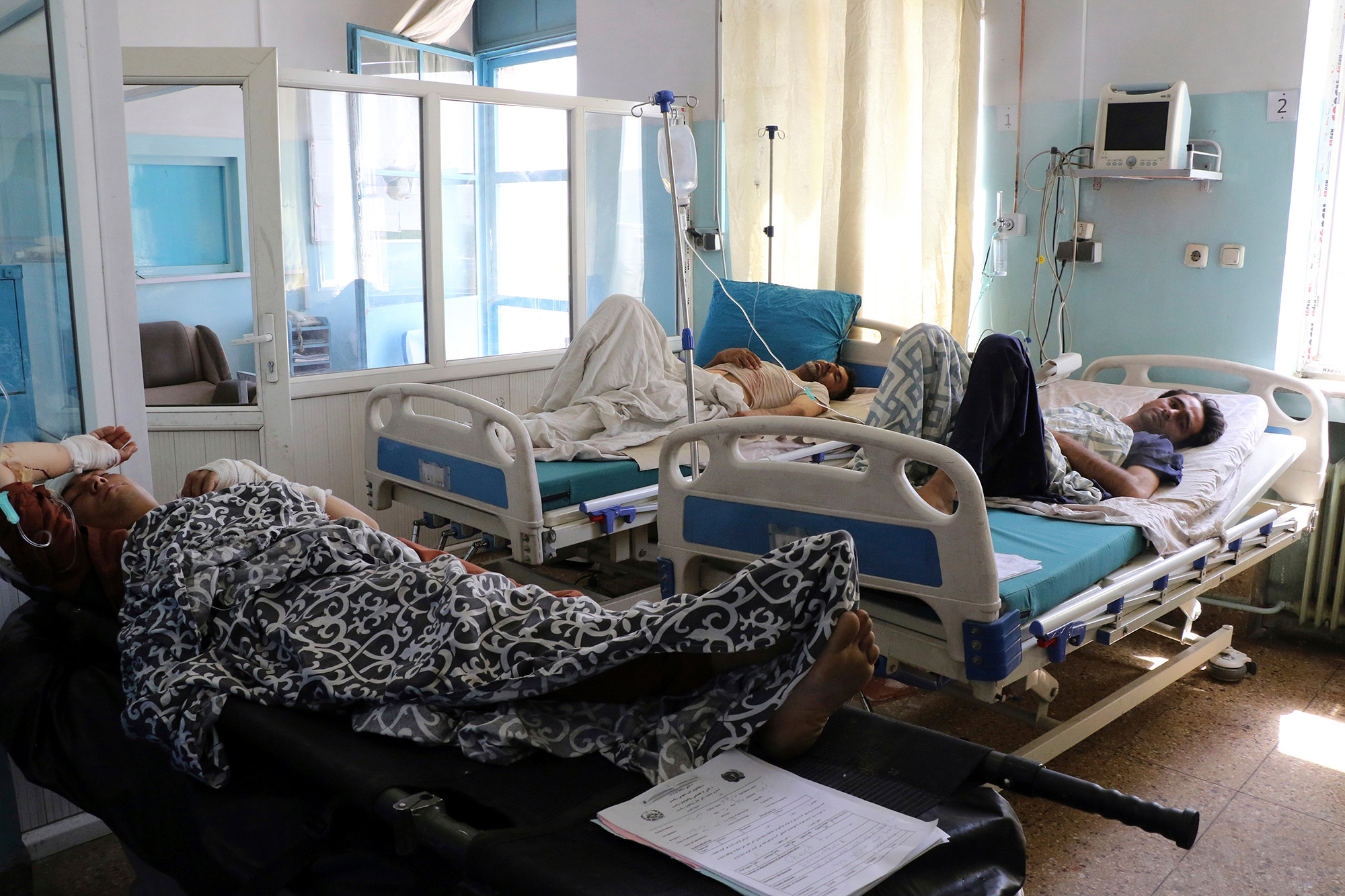 ▲ Afghans wounded in the deadly attacks at the Kabul airport are treated at the hospital on Aug. 27, 2021./AP

“We took care of the most urgent cases, and the surgeons and doctors reviewing the patients to make sure they are no missed injuries,”

Dr. Gina Portella, Emergency’s Medical Coordinator in Kabul, said in an exclusive interview with The Post on Friday afternoon, acknowledging that the hospital was at first swarmed. “Many people were coming in, in a state of panic, and we just had to reassure them.”

The attacks – carried out by the ISIS affiliate in the region known as ISIS-K – killed at least 95 people,

including 13 US service members. A further 150 were wounded – and many remain in critical conditions inside the hospital.

Portella noted that 38 patients from yesterday’s attacks are at the hospital and are receiving life-saving treatment.

But for the staff, there is little time to ask questions or take down details – it’s about moving as quickly as possible through the hospital,

which has a pre-determined protocol and outside area to set up for patients specifically to cater to large-scale bombings.

That’s the chilling reality Afghans have dealt with for decades.

Almost year-round, the Emergency hospital is brimming not only with the war-wounded but those caught

in the crossfire of gang warfare and senseless criminal acts.

A sign outside the hospital warns visitors in red letters: “No weapons.”

And given that the facility has long been the closest advanced medical care for those in rural areas,

in blistering weather conditions – and thus then grappling with severe infections on top of everything by the time they arrive.

Portella acknowledged that before Thursday’s assailment,

there was actually a brief reprieve from the constant violence after the Taliban takeover almost two weeks ago.

she said. “Then suddenly, there was this attack in very crowded areas.”

In my experiences visiting Emergency throughout the duration of the protracted US-led war,

one-third of the patients were children — even babies — whose tiny bodies had been battered by bombs and bullets.

Emergency, which is stylized in capital letters as EMERGENCY, was first started in 2000 by an Italian war surgeon and human rights activist,

the late Gino Strada, while Afghanistan was under the Taliban’s rule. Strada is said to have directly negotiated with then-notorious Taliban leader Mullah Omar,

convincing authorities to hand over a bombed-out kindergarten to be built into the hospital that it is today.

The center has continued to operate through the ups and downs of mayhem and madness that has befallen the country.

And regardless of how the situation unfurls, the EMERGENCY team said it is committed to staying and

serving the Afghan people in need long after that final US plane has soared through the skies.

“The job isn’t always easy,” Portella added. “But I see what is going on here,

and I know the people really need this. The problems here have lasted so long;

I have to try to do something.”