The Global "Perfect Storm" Sparked by the War

Sparked by the War

A typhoon begins as a local disturbance without much strength,

but it triggers other natural phenomena that wreak tremendous destruction.

The Russian-Ukrainian War, that began on February 24, 2022 when Russia attacked Ukraine under the name of a “Special Military Operation,” has now been going on for over two months.

The aftermath of the war is growing deeper and wider. Global economic growth is stalling while inflation is soaring. Energy and food supply lines are becoming insecure, and the response to climate change is being put on hold. The lives of people in underdeveloped countries, already suffering from hunger with disaster hanging over their heads, are now getting worse.

Representatives of the European Union and the UN are mediating, and have proposed negotiation between the two heads of state. All the meetings between representatives of Ukraine and Russia have proved fruitless thus far, and the war is expected to be prolonged.

The Office of the High Commissioner for Human Rights (OHCHR) reported 2,072 civilian deaths and 2,818 injuries in Ukraine. These statistics are as of April 18th; actual casualties are certainly far greater. Ukraine's Interior Ministry stated that at least 2,700 civilians have been killed, among them 198 children and 355 more children injured.

That figure was announced at the Conference on Financial Assistance to Ukraine held in Washington, D.C. on April 21st. But director Malpass said off the record, “The estimate of the extent of damage was narrowly taken. We expect the real damage to be astronomical.”

Ukraine’s President Zelensky, who attended the meeting online, explained that $7 billion (8.7 trillion won) will be needed every month to recover from the economic losses from the war and that “it will cost hundreds of billions of dollars to rebuild.”

Over 300 bridges and 8,000 kilometers of roads have been destroyed throughout Ukraine, and the damage to homes is beyond count. As the war continues, the cost of damage is expected to continue to rise.

The price tag of the war Russia will face

Ironically, the damage to the aggressor, Russia, is likewise huge. Countries around the world have condemned Russia and imposed economic sanctions. Currently, Russia is on the verge of national bankruptcy due to global blockades on financial transactions. If Russia defaults, it will be the first national bankruptcy in 104 years since 1918, the year after the Bolshevik Revolution.

To overview the scenario, major countries such as the United States and European Union condemned Russia's action and canceled major Russian banks’ membership in the Society for Worldwide Interbank Financial Telecommunication (SWIFT) in February.

is an international code created for fast and accurate overseas remittance, a system used by 11,000 banks in 200 countries. SWIFT is not a direct money transfer channel but an important communication channel for conducting international bank transfers.

What happens if a bank is kicked out of SWIFT? International financial transactions are blocked, making it impossible to use foreign currency. The U.S. SWIFT ban excludes Russia from access to U.S. banks. This prevents Russian holders of dollar government bonds from receiving interest in coveted dollars as of April 6th.

Russia, anxious to honor its promissory notes, resorted to paying interest in rubles rather than dollars, but the credit default swap (CDS) market supervisory authority reckoned this as “default.”

Russia has been granted a 30-day grace period. If interest is not paid in dollars by May 4th, Russia will receive a final default judgment.

right before our eyes

The crisis is not restricted to warring parties of Russia and Ukraine. The global economy, which has become more volatile due to the conflict, has now gathered a thick layer of gloomy overcast. In particular, rising crude oil prices and rising grain prices are sucking the entire world economy down in a universal crisis: the classic "Perfect Storm."

International Monetary Fund's (IMF) World Economic Outlook report released on April 19th foresees that the global financial crisis from the war will last a long time and will worsen before it starts getting better.

The most striking feature of the IMF's economic outlook report is the Eurozone, whose growth forecast for this year dropped a whopping 1.1 percentage points from 3.9% to 2.8%, and next year's growth rate is expected to be only 2.3%. Particularly Europe, geographically close to Russia and Ukraine, and depending on Russian gas as its prime energy source, will inevitably feel the full, direct impact of the war.

The inflation outlook presented by the IMF is even bleaker. The inflation forecast for 2022 is 5.7% in developed nations and 8.7% in emerging and developing nations due to war-induced raw material price hikes and increased price pressure, up 1.8% and 2.8 percentage points over the January outlook. Owing to this war, we may expect to experience global "stagflation," where prices rise while growth slows.

The future looks even more dismal. The report predicted that growth rates will decrease by about 3.3% after 2023, and there are concerns that growth rates may drop further contingent on factors such as expansion of the war or recurrence of the pandemic. 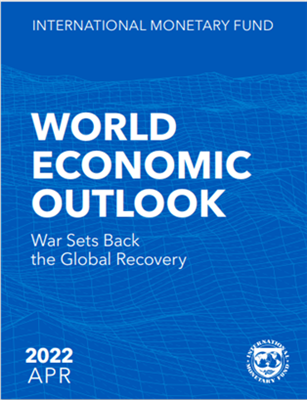 The UN published an analysis of the global crisis caused by this war on three fronts: rising food prices, rising energy costs, and financial debt.

The United Nations is concerned that the Russian-Ukraine war has set in motion a global chain reaction, burdening a world economy already hit by COVID-19 and climate change, and is particularly worried about its multiplied impact on developing countries.

Data show that 1.7 billion people in 107 economies are exposed to critical want in at least one of three areas: food, energy, and finance. Most of these people are living in developing countries, and a serious concern is that 69 economic zones with 1.2 billion people are undergoing major crises in all three areas at once.

Due to the impact of COVID-19, food prices have already risen in an environment where socio-economic stress is high, so social tensions are bound to intensify.

Rising food prices and social unrest are connected. You can clearly see the correlation in the graph below, where solid blue, red, and yellow lines represent the prices of agriculture, commodities, and grain, respectively.

Plainly the period when each solid line rises sharply coincides with the periods of “Social Unrest in Various Countries,” “Arab Spring in the Middle East,” “COVID-19 Pandemic,” and “War in Ukraine.”

Oil and gas prices are rising sharply due to the Russia-Ukraine war, and the United Nations is concerned that the price rise will actually increase the consumption of fossil fuels worldwide. How is that?

For the past 10 years, the international community has set "carbon reduction" as the top priority on their agenda to combat climate change. People all over the world were pulling together in the drive to reduce humanity's use of fossil fuels. However, due to the rise in crude oil and natural gas prices, these efforts are once more in danger of being waylaid. The rising cost of energy due to the war has made it more likely that many countries will return to fossil fuel drilling, mining and investments in fossil fuel-based energy.

Inflation rose to 5.2% in 2021, a 10-year high. In response, many central banks are announcing that they will raise interest rates one after another, which increases the cost of repaying debt for developing countries.

Data show that 60% of the least developed countries and other low-income countries are at high risk of, or already suffer from, debt.

duty shared by all

“We have a clear moral duty to support the 1.7 billion other potential victims of this war.”

In a global era in which the whole world is connected and influencing each other, the war between Russia and Ukraine is not just a fire across the river. On April 13th, UN Secretary-General Antonio Guterres predicted that a ceasefire to end the Ukraine crisis would not be easy, and he appealed to the world to join in humanitarian aid.

Now the outriders of this war are brewing threatening dark clouds all over the world, and this is expected to worsen into a “perfect storm,” a global economic crisis that strikes all at once everywhere.

To address the humanitarian crisis facing Russian and Ukrainian civilians and prevent further global economic division, responsible attention and multilateral cooperation of all peoples around the world is urgently needed.

“We are now facing a ‘perfect storm’ that threatens to devastate the economies of developing countries. The people of Ukraine cannot bear the violence being inflicted on them. And the most vulnerable people around the globe cannot become collateral damage in yet another disaster for which they bear no responsibility.”