As the crisis of climate warming escalates, the electric vehicles are also proliferating. By 2025, the global EV supply is expected to reach 20.6 million—more than three times the number in 2021.

On June 1, Bloomberg New Energy Finance (BNEF), an energy research institute, published the “2022 Electric Vehicle Forecast Report.” The report predicts that the global supply of EVs will increase from 6.6 million units in 2021 to 20.6 million vehicles by 2025.

In addition, the BNEF predicts that by 2025, Europe and China will account for 80% of global EV sales, and the proportion of EVs in Germany, the UK and France could also rise to 40-50%.

Electric Vehicle Sales by Vehicle Type as of 2021 (BNEF)

The growth rate of electric vehicles is now very steep.

In fact, sales of internal combustion automobiles peaked in 2017 and are in steady decline, and this downward trend is expected to continue in proportion to the increase in the number of electric vehicles.

Norway ranks first in the world for EV penetration. In Norway, 90% of new vehicles are already electric (including hybrids). Moreover, Norway has announced that it will sell fossil fuel burning automobiles only until 2025, after which it will stop selling.

Electric vehicle penetration in China is also very steep. The penetration rate of electric vehicles in the PRC this year is 20%, a tenfold increase compared to five years ago. There is also news that Beijing has decided to allocate 70% of license plates for new cars only to electric and hybrid vehicles.

China has already decided to provide subsidies for the purchase of electric vehicles only till the end of this year, as the demand for EVs has surpassed that for internal combustion vehicles.

Electric vehicles are eco-friendly while driving, but…….

Electric vehicles are in a mad rush toward zero carbon.

However, for some reason, a controversy has arisen that electric vehicles are greenwashing*. What could they mean by stating that EVs are damaging the environment?

*Greenwashing: A compound word of "green" and "whitewashing"; it refers to camouflage environmentalism.

Here we present the case that even electric vehicles are actually greenwashing.

Over the entire life cycle assessment (LCA) of EVs from production to disposal, more carbon is emitted than internal combustion engine vehicles.

The heart of an electric vehicle is the battery. It is argued that an inordinate amount of carbon is emitted because electricity produced from fossil fuels is used in the production and disposal of batteries.

According to the test results of the Korean Ministry of Environment in 2016, the amount of carbon dioxide generated per km was △86.9g for electric vehicles, △137g for diesel vehicles, and △177g for gasoline vehicles.

The Volkswagen Group announced a comparison of carbon dioxide emissions from production to driving of its electric and diesel vehicles.

The amount of CO2 emissions per km was △142 g for electric vehicles and △140 g for diesel vehicles, showing that EVs emit more carbon dioxide.

On the other hand, during vehicle production, △EVs emitted 57g of CO2 while △Diesel vehicles produced 29g of carbon dioxide.

Both experiments in Korea and Germany conclude that electric vehicles are eco-friendly in the driving phase.

Rare earth metals such as lithium and cobalt are contained in batteries, which are core components of electric vehicles. During the mining and smelting of these minerals, harmful by-products and air pollutants are generated. It is also noted that an enormous amount of groundwater is required for mining.

Channel 4, a British private broadcaster, reported on the poor mining site and damage situation in the Democratic Republic of Congo in Africa on the current affairs program Unreported World, and the scene was shocking.

(Cobalt mining site in the Democratic Republic of the Congo, Source: Unreported World)

70% of the world's cobalt is mined in Central Africa, most of which comes from southern Katanga, one of the 10 most polluted places on earth.

Young people in this country are mining cobalt, a heavy metal, for 12 hours a day with bare hands without any protective equipment to earn 150 dollars a month. It is said that even children are driven to the mining site.

In addition, toxic substances from the mining process flow into the river, killing fish, and many children with disabilities are being born near the mine.

As a result, many global companies are joining the Responsible Minerals Initiative (RMI), an international cooperative that monitors whether the minerals required for battery production are ethically produced and distributed.

In addition, the European Transport & Environment Federation (Transport & Environment) predicts that the amount of metal required for batteries will be reduced as the technology develops, which will increase the eco-friendliness in the battery production stage. We are also developing a technology using sodium, that can be extracted from seawater, instead of lithium, which causes groundwater contamination during the mining process.

Waste batteries are difficult to treat

There is also a risk of environmental pollution at the battery disposal stage of electric vehicles. Waste batteries are made of several heavy metals classified as toxic. Greenpeace forecasts that by 2030, global waste battery emissions will reach about 12 million tons per year.

Fortunately, there is quite active discussion about recycling waste batteries. Technology is being developed to utilize waste batteries as an energy storage system (ESS) or to recycle decomposed minerals.

SNE Research, a market research firm, predicts that the global waste battery recycling market will grow to 600 trillion won by 2050.

German chemical company and recycling specialist Duesenfeld announced that it has succeeded in recycling 96% by disassembling lithium-ion batteries, extracting raw materials such as nickel, manganese, cobalt, and lithium, and refurbishing them for battery operation.

The production of electricity, the power source for electric vehicles, from fossil fuels such as coal and oil, is also a hurdle to overcome.

As an alternative, research is underway for using renewable forms including solar as energy sources to generate electricity.

Tesla advertises charging its vehicles through an energy storage device called a “power wall” which can also service household electricity.

Volkswagen Group predicts that once renewable energy sources such as solar and wind are used to power electric vehicles, CO2 emissions will drop dramatically from 62g per kilometer to 2g per kilometer based on the EU electric mix.

What we can do

In fact, the carbon emission of electric vehicles differs according to the research method of each country and institution. According to Life Cycle Assessment (LCA), there are reports that EVs emit less CO2 than fossil fueled vehicles.

Citing a report titled “The Underestimated Potential of Battery Electric Vehicles to Reduce Emissions,” published in the Dutch Scientific Journal in 2019, it states that electric vehicles are more environmentally friendly.

It points out that the greenwashing controversy over EVs arises due to △ overestimation of the amount of carbon dioxide generated during battery manufacturing △underestimation of battery life △assumption that the power source will still be based on fossil fuels △unrealistic application of energy consumption measurement method.

International Council for Clean Transport (ICCT), a non-profit organization, likewise reports that electric vehicles emit less greenhouse gas than internal combustion automobiles, regardless of what fuel they are supplied with. 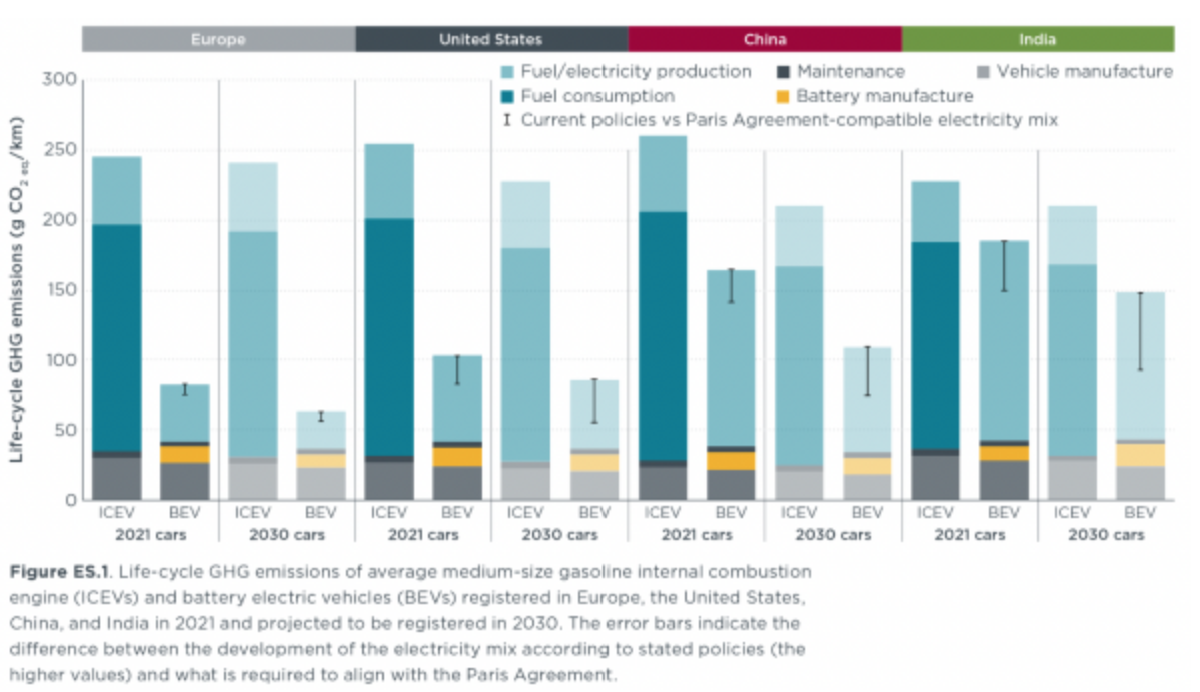 The UN Member States’ goal to achieve net zero by 2050 is a global promise. To achieve this goal, zero-emission vehicles should account for 61% of global new car sales by 2030 and 93% by 2035. But it doesn't seem easy.

It is clear that technological development will help reduce carbon. But one of the quickest and surest ways we can practice it is to reduce the use of cars by walking, biking and using more eco-friendly public transport.