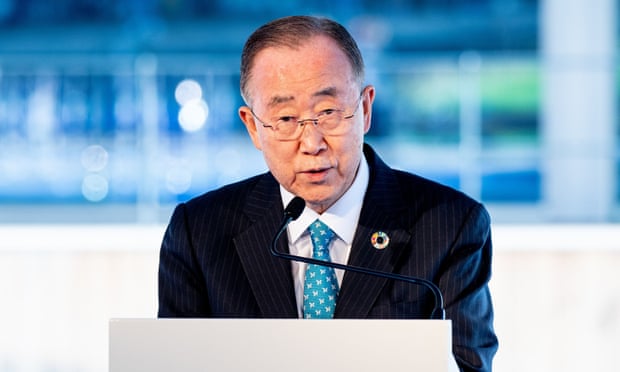 ▲ Ban Ki-moon made the plea on behalf of the Elders group of former world statespeople and prominent community and business leaders. Photograph: Rex/Shutterstock

US president Joe Biden and the president of China, Xi Jinping, have been urged to meet before the UN Cop26 climate talks to search for common ground by the former UN secretary-general Ban Ki-moon and other prominent global voices.

“We are appealing to the leaders of the US and China to see their common interest and find a way to work together. We need an ambitious 2030 [carbon] target from China and the US to deliver what they have pledged,” said Ban, speaking on behalf of the Elders group of former world statespeople and prominent community and business leaders.

Xi met the former US president, Barack Obama, weeks ahead of the Paris climate summit in 2015, to forge a deal between the world’s biggest emitters.

“Biden and Xi need to do what they used to do with Obama – the Paris agreement might not have been possible without those two countries,” said Ban. “We must do everything possible … Cop26 will be one of the most important in history.”

Ban warned that current pledges on cutting emissions – known as nationally determined contributions, or NDCs – from major economies were insufficient to hold global heating to 1.5C, the aim of the Cop26 conference. “We need these NDCs to be ambitious enough. We need the right signals to strengthen the NDCs,” he said.

Xi is unlikely to come to Glasgow for Cop26, which opens on 31 October, or to the G20 leaders’ meeting in Rome, which will take place the same weekend. He has not left China since the start of the Covid-19 pandemic.

There are no current plans for a summit between the presidents, who lead the world’s two biggest emitters, and biggest economies. However, Xi and Biden recently had a long phone call in which the climate was discussed, and the US climate envoy John Kerry has held meetings with Chinese representatives.

Ban is part of the Elders group of former world statespeople and prominent community and business leaders, which has written to the leaders of the G20 nations to ask them to strengthen their commitments on cutting greenhouse gas emissions before the Cop26 summit in Glasgow which begins in just under two weeks.

“We are asking these countries to think again and be ambitious. All G20 countries need to take further actions to stay within 1.5C. Wealthy countries need to put more finance on the table [to help the developing world],” he said.

The aim of Cop26 is to “keep 1.5C alive”, which means setting out a pathway to ensuring the world cuts emissions sufficiently to hold global heating within 1.5C of pre-industrial levels, the upper ambition of the 2015 Paris agreement. Scientific advice is that this will take emissions cuts globally of about 45% by 2030, compared with 2010 levels.

Mary Robinson, chair of the Elders, said: “We are not going to close the gap at Glasgow, but we have to align with 1.5C – there has to be a political commitment to 1.5C. There has to be a process devised as to how to put pressure on the target countries who are not stepping up.”

She said countries without adequate plans must return to the table with new plans every year, not every five years as envisaged under the Paris agreement.

She also warned against people judging Cop26 a failure because the highest ambition – of fully fledged plans from 196 countries that would cut emissions by 45% – had not been met. “It’s extremely important that we do not have fatalism on Cop26, but keep hope alive,” she said. “We will see positive developments at Cop26.”