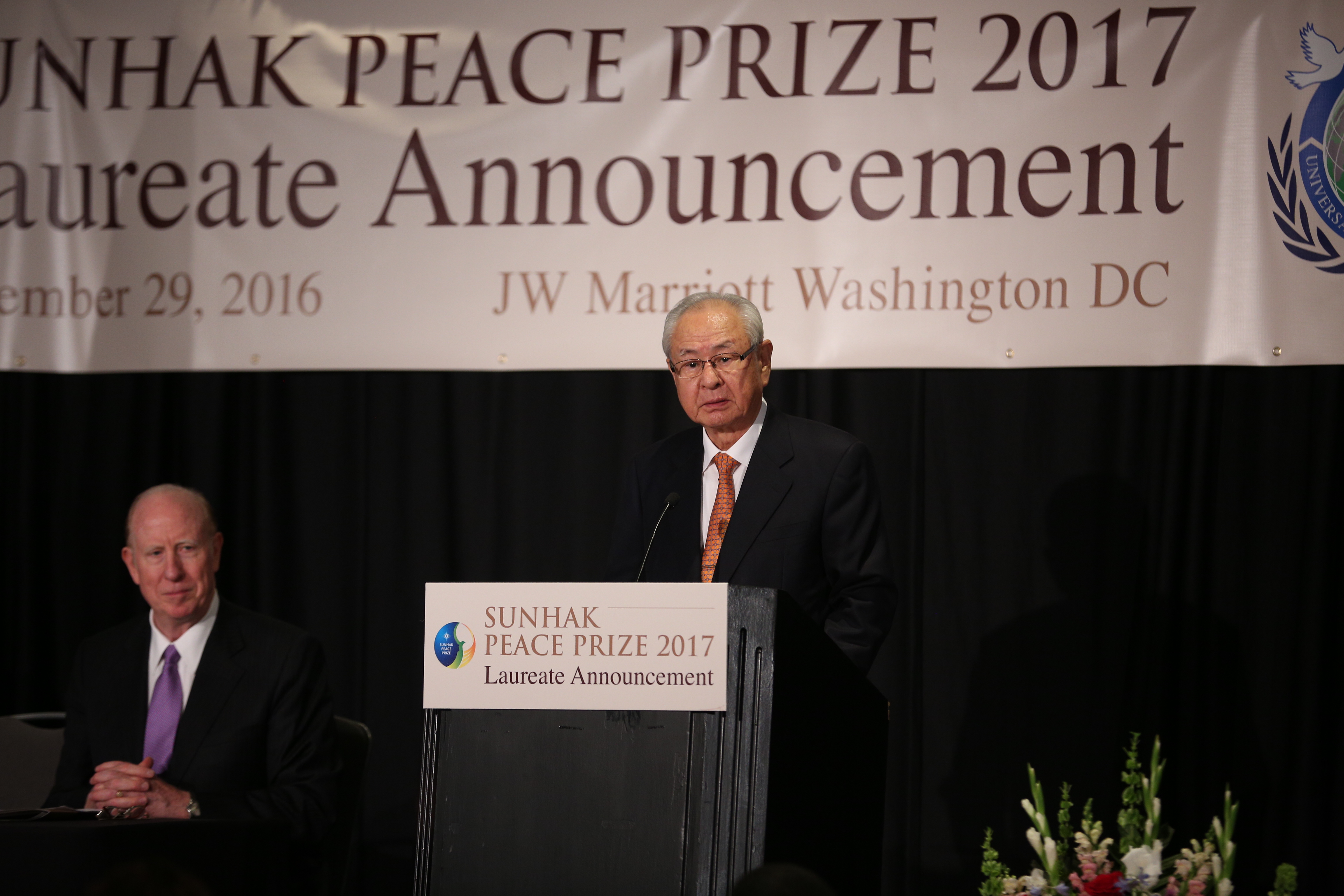 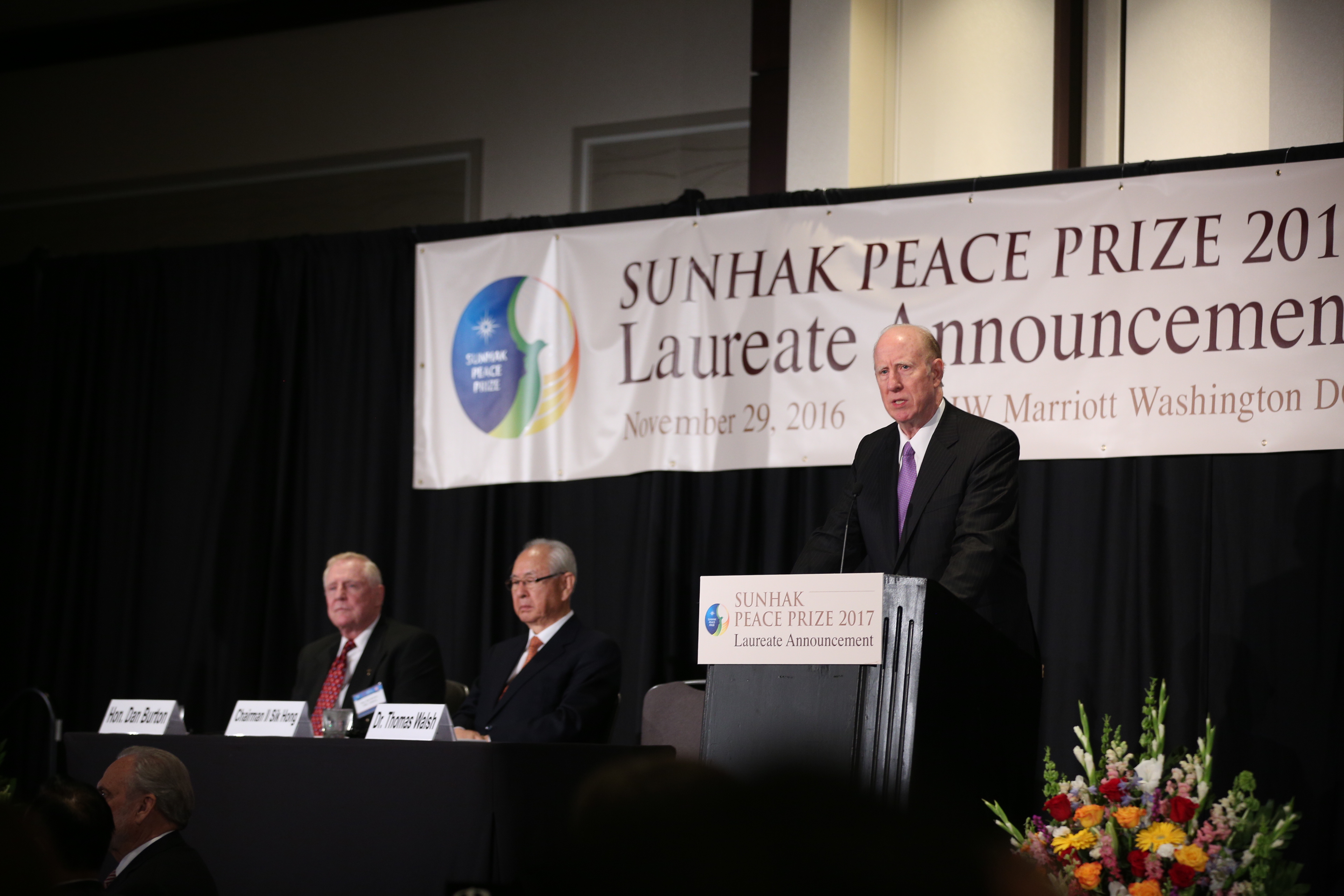 Distinguished leaders from America and throughout the world. Good afternoon.

It is my great pleasure to be here today for this historic International Leadership Conference in Washington DC.

The Sunhak Peace Prize was established by Rev. Sun Myung Moon and Dr. Hak Ja Han Moon, based on their peace vision of “One Family under God,” to help prepare for a peaceful future for all humankind Indeed, at this time in history, we are crossing a bridge into a momentous new era, and we are being tested on the very essence of our humanity. As we face the largest number of displaced persons on the global level since World War II, we must make a transnational effort for the common benefit of humankind.

It is with this critical situation in mind that the Sunhak Committee has focused on the global refugee crisis. The Committee has chosen, as the 2017 Sunhak Peace Prize laureates, Dr. Gino Strada, who provides medical and surgical care to the victims of war and poverty, and refugees around the world, and Dr. Sakena Yacoobi, who presented an innovative solution for refugee resettlement through education.

Dr. Gino Strada is an outstanding humanitarian who has provided medical and surgical treatment for 28 years to people in war-torn countries. In 1994, he established a humanitarian organization called “Emergency,” which has been operating more than 60 emergency medical facilities in 16 nations; he has contributed to saving an amazing 8 million lives, many rescued from situations of dire vulnerability.

Dr. Gino Strada sees “the right to be cured” as a basic and inalienable human right, and is raising the bar, striving to provide high-quality medical treatment free-of-charge to the people in need. He received agreements from at least 11 governments in the African region, who committed to providing free healthcare for all, and took a leadership role in raising awareness of human rights. The first free-of-charge, world-class center was built in Khartoum (Sudan) and is specialized in cardiac surgery. With steadfast resolve, he is building a movement to oppose conflict and violence, based on the moral and political point of view that war cannot be justified for any reason.

Meanwhile, Dr. Sakena Yacoobi is an educator known as the “Mother of Afghan Education” and the “innovator of the Afghan rebuilding process.” She proposed a supplementary solution to the issue of settlement, through providing education for those living in Afghan refugee camps. Convinced that education is the only sustainable solution for the future of refugees, she established the Afghan Institute of Learning (AIL) in 1995, and for over 21 years has provided education and vocational training to more than 13 million refugees.

Above all, Dr. Sakena Yacoobi is committed to women’s education, with an innovative conviction that educating girls is educating future generations. In the process she has greatly improved the rights and social status of women in Islamic society. Even under the Taliban regime that strictly prohibited women from receiving education, she operated underground schools at the risk of her own life, making possible the education of more than 3,000 girls.

Due to her pioneering efforts, unlike the first generation of Afghan refugees suffering from despair and poverty, those comprising the second and third generations of refugees are currently able to play an active role as community leaders in the process of rebuilding society Due to success stories such as these, presently Dr. Yacoobi is assisting the international community, including advising the UN as an expert in refugee crisis resolution.

The Sunhak Committee annually presents a “future-peace agenda” that will guide our shared human destiny toward peace. For the 2017 awards, the Sunhak Committee has made the refugee crisis its core theme. While diaspora has been one of the oldest recurring adaptive measures to crises in the history of civilization, now more than ever, this problem should be addressed as one of the most crucial issues of our time.

Observing the refugee and diaspora crises occurring the world over, I am reminded once again of our Founders’ love for humanity, which has transcended national borders. The great love for humankind with which the 2017 Sunhak Peace Prize laureates have sought to solve these problems has historical significance in our struggle for a sustainable peace. All those living at this time must remember the value of our common humanity, recognizing that we are all interconnected. With international solidarity and cooperation, we must earnestly seek the wisdom that will permit refugees to recover and re-establish stable and fruitful lives.

In these troubled times, nations’ willingness to cooperate with each other is being tested. Therefore, for the sake of lasting peace, we are addressing such an issue as the refugee crisis. Searching for the heroes of today is like searching for a steady ray of light in pitch-darkness. The broad vision and change in our behavior advocated by the Sunhak Peace Prize will serve as a beacon of hope revealing the path to the 21st century civilization of peace.

The 2017 Sunhak Peace Prize seeks for a peaceful solution to the "refugee crisis."  The world is now witnessing the highest levels of forced migration ever recorded.  In 2015 alone, the United Nations High Commissioner for Refugees (UNHCR) reported over 12.4 million people worldwide displaced internally, and overall more than 65 million people were forced to flee their homes due to conflict, violence, persecution and other human rights violations.

With the largest refugee crisis since World War II at hand, we must not forget that these refugees are mothers, fathers, sons and daughters who are no different from us.  It is important to recognize the inherent value in all of us as human beings.  We must not turn away from the cries of people grieving the loss of their loved ones at sea, or devastated by the loss of their homes and family members.  It is our hope that through international solidarity and cooperation, refugees may once again enjoy peaceful lives in their own homes. 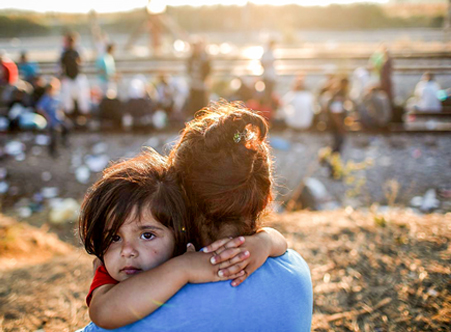 The 2015 UNHCR Global Trends Report found that the number of people experiencing forced migration worldwide was 65.3 million.  It is the first time in the organization’s history that the 60 million threshold had been crossed, which indicates that one in every 113 people globally is now an asylum-seeker, internally displaced or a refugee.  This is the largest total UNHCR has ever recorded, and it highlights the fact that it is an urgent crisis facing humanity.

Why the refugee numbers have massively increased

There are three major causes for the dramatic upsurge in the refugee population during the last five years.  Firstly, armed conflicts in Somalia and Afghanistan that have persisted for 30 years and 40 years respectively have yet to see any signs of closure.  Secondly, though the Syrian civil war, the world's single largest driver of displacement in recent history, has received the most attention, there have been frequent violent disputes during the past 5 years in other countries as well, including South Sudan, Yemen, Burundi, Ukraine, and the Central African Republic.  Thirdly, a stable solution is yet to be found for refugees and internally displaced persons in the 21st Century.

● Gino Strada has provided medical and surgical care to the victims of war and poverty, and refugees around the world

● Sakena Yacoobi developed an innovative solution to the refugee settlement problem, through education

Dr. Gino Strada’s achievements are widely known for advancing “medical and surgical aid” over the past 28 years; his compassion for humanity has taken him beyond national borders, even into the epicenter of conflict in Afghanistan, the Middle East and Africa. His work has brought healing and relief to 8 million people around the world.

Gino Strada maintains that “the right to be cured” is a basic and inalienable human right, and on that basis, in 1994, he established the international humanitarian organization known as “Emergency.” Emergency has been operating more than 60 emergency medical facilities in 17 nations and has treated over 8 million people to date.

In 2008, he secured the signatures from the governments of 11 African countries (Central African Republic, Chad, Democratic Republic of the Congo, Djibouti, Egypt, Eritrea, Ethiopia, Somalia, Sudan, South Sudan and Uganda), advocating a “Manifesto for a Human Rights-based Medicine.” Dr. Strada has led a global campaign to promote human rights awareness and its relevance to health care. In addition, EMERGENCY built the first free-of-charge, world-class Centre of Excellence in Khartoum, Sudan. The centre offers free high-quality heart surgery to patients with acquired or congenital heart diseases in the region. The construction works of the second centre, a Regional Hospital for Paediatric Surgery in Uganda, are about to start and are planned to end in December 2018.

Dr. Strada is recognized as an outstanding humanitarian, not only for his aid efforts during the rapid increase of migrants to Europe, but also for his active involvement in anti-war campaigns. Dr. Strada has been recommended for the Nobel Peace Prize, and his work is featured in a documentary called “Open Heart” that introduces his medical aid work. That film was nominated for the Academy Award’s Best Documentary Short Film category.

Dr. Sakena Yacoobi is a committed educator who has devoted herself to women’s education. She has developed an innovative vision for education in the Islamic world, based on her belief that “educating girls is educating future generations.” In order to establish a stable refugee education system, she founded the Afghan Institute of Learning (AIL) in 1985, providing education and health services for more than 13 million refugees.

Above all, Dr. Yacoobi has been acknowledged for greatly improving the rights and social status of women in Islamic society. She operates more than 80 underground schools, working even at the risk of her own life. Her efforts have provided education for thousands of girls, even under the Taliban regime that strictly prohibited women from receiving education. Presently she is actively assisting the international community, including the United Nations, as an expert in countering refugee crises. Her achievements led to her being nominated for the 2005 Nobel Peace Prize.

Committee Chairman Dr. Il Sik Hong, former President of Korea University in Seoul said, “As a prize founded on the vision for peace of ‘One Family under God,’ the Committee presents the refugee crisis as its core theme for the 2017 awards.”

Furthermore he added, “Today, facing the largest refugee crisis since World War II, the citizens of the world must remember the value of each human being, which binds us together. Through solidarity and cooperation we need to solve this problem together.”

The Sunhak Peace Prize annually recognizes and honors individuals or organizations that have made enduring contributions to peace and human development. The prize includes a cash award totaling one million dollars. The award ceremony will be held on Friday, February 3, 2017 in Seoul, Korea.